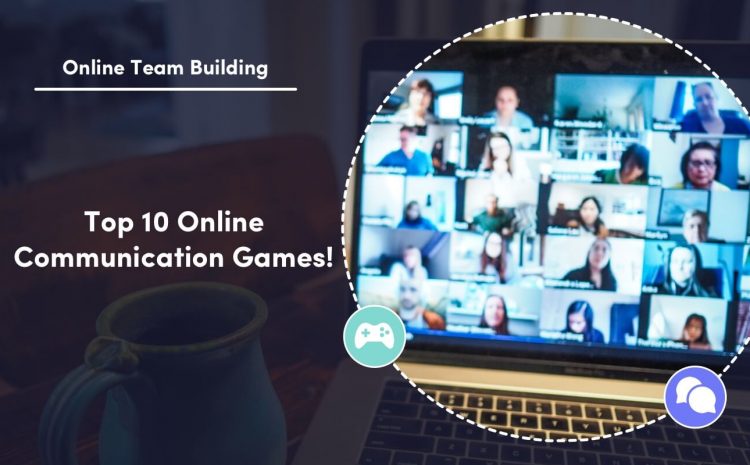 Suppose you discover yourself in the same situation as Tom Hanks. In that case, collaborating on a do-it-yourself project with a friend like Wilson the ball, it is important to pay attention and improve your ability to communicate with others. Games that facilitate online conversation have the potential to serve as a channel between you and the world in general.

There is no restriction over the number of ways wherein one may communicate if one combines inventiveness and technological advancement effectively. We provide you with 15 of these interesting digital communication games that might be wonderful communication workouts for teams who are geographically separated from one another.

What are referred to as online communication games?

Generally, online communication games are being played on virtual communication networks to engage personnel who work remotely. These may also be performed with various twists at the workplace or in hybrid work environments. These competitions have as their primary objective the cultivation and enhancement of communication among team members who are dispersed across many places. It is possible to select from a wide variety of free and paid icebreaker games, online games for virtual teams, and other options, considering your team’s composition and the specifics of your area of business.

Why are online communication games beneficial to the workplace?

When working in distant environments, it is not uncommon to feel excluded or isolated; thus, playing online communication games is a fantastic approach to help bridge such gaps. The following are some of the advantages:

Two truths and a lie is another digital recreation of one of the traditional board games played over the telephone. This particular activity is great for breaking the ice and making it easier for team members to socialize while also having a good laugh.

Everyone in the group gets to act as Sherlock Holmes and uncover the truth, and it does not require any special equipment or props, so it is a good time for people of all ages and sizes of groups.

The use of simple yet entertaining virtual icebreakers is a great method to ease into the discussion, particularly during the opening rounds of meetings or gatherings. You can produce many different get-to-know-you-better lists, each containing questions that need immediate thought and concise responses. There is a wide variety of options available because of the availability of over one hundred distinct types of interactive virtual icebreakers.

How is this game played?

We appreciate that the game’s straightforward and flexible selection of questions may be adapted to suit any situation.

Back-to-back Drawing is yet another innovative option available inside the selection of online communication games. A sketching exercise serves as the primary focus of the game, which mostly needs players to sit facing one another but with their backs to one another. When playing in an online or remote setting, participants in each pair have the choice to mute their videos and focus on the game at hand.

Verbal communication only, no visual elements allowed, although channeling your inner Monet is required for this one. Presenting your “pieces of art” is a terrific opportunity to break the ice while having a good laugh with your other collaborators.

On the list of games for online communication, the “3-Minute Vacation Game” stands out as an entertaining and useful option. The necessity of engaged listening is emphasized throughout the game, in which participants act as either talkers or listeners and then exchange their insights.

The selected talker gets three minutes to describe their ideal vacation in detail, but they are not allowed to reveal the destination of their trip.

This is an excellent option for individuals who wish to hone their abilities in pitching ice to an Inuit because it allows them to do so.

It is a game that may get rather addicting. Emojis have, as we all know, simplified the art of communication by reducing it to a series of pictures that are entertaining and captivating. The objective of this game, considered one of the more simple online communication games, is to decipher an emoji string that one player sends to the other players. These might be phrases from popular culture, titles of movies, or names of well-known people, among other things.

Because it has a topic applicable to everyone, we will give this one smiley. Understanding a surprise word or sentence will be something almost no one will want to avoid doing, making it a fantastic engagement activity.

Charades are among the most popular online communication games, and it is the kind of game teams can repeatedly play without becoming bored. You may use a random image generator like RandomWordGenerator.com to compile various themes that can be shown in its virtual avatar. These topics range from popular music and movies to phrases and other things.

Although playing something out on screen might not have the same impact as doing so in person, the enjoyment factor is still very much present.

Mad Gab is a game that makes it onto our list of recommended online communication games since its major focus is on innovative thinking and rapid reactions for efficient conversation. Mad Gab Flashcards is a wonderful resource from which to obtain some entertaining conversation starters.

We had a lot of fun with how fast the game moves and the thrill of trying to make sense of the nonsense.

One of the more exciting and entertaining question-based internet communication games is called Yin and Yang. The key to solving this puzzle is engaging in fruitful conversation by questioning and seeking to understand what is being said.

It is a straightforward guessing game of the elementary school kind that does not require much more and can be played with minimal preparation or resources.

Can You Hear Me Now?

This traditional game of word association, Pictionary, has been given a modern makeover in the form of an internet communication game. Its purpose is to strengthen teams’ capacities for dependency and collaboration among themselves.

This scavenger hunt is equally as interesting and difficult in its digital iteration as it is in the real world. The remote team members face a race against the clock to get all the things that have been called out.

The fact that there is no intercommunication taking on in this situation does not change the fact that we enjoy the sentimental value of a scavenger hunt.